According to an old custom Montenegrins will open their door wide as a sign of hospitality. They are well known for offering their guests the best food and drink they have in the house, reserve for them the best place at table, and do their best to make their stay in their home as comfortable as possible. Hospitality is second nature to a Montenegrin.

Montenegrin cuisine is a result of Montenegro’s geographic position and its long history. The traditional dishes of Montenegro’s heartland and its Adriatic coast have a distinctively Italian flavour evident in the bread-making style, the way meat is cured and dried, cheesemaking, wine and spirits. Other influences come from The Levant and Turkey seen in dishes such as pita, burek, and baklava. Hungarian dishes such as goulash are also very common as are continental dishes such as doughnuts and Vienna-style bread.

The cuisine varies geographically with the coastal area traditionally eating a Mediterranean cuisine with plenty of seafood while the north of Montenegro has more meat-based dishes with lamb, cicvar, polenta, and tripe to name a few. The traditional manner of cooking under a bell, especially for lamb and bread or flat cake, is still used today. A shallow clay dish is covered by a bell which is buried under ash and coals allowing it to be heated from all sides.

Kotor has many restaurants, most of which have a distinct Mediterranean menu. For execellent Pizza there is the Pasteria opposite the Cathedral of St Tripun in Stari Grad, the Old City. For good food and a delightful setting try the Hotel Splendido in Prcanj or the The Galion between Muo and Kotor on the water’s edge of Kotor Bay. A good fish restaurant in the old city is the Crsarica. 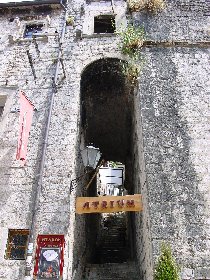 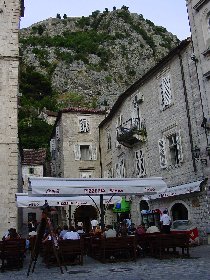 Restaurants and local beer and wine

A typical breakfast is Cicvara which is stewed corn meal in Skorup (salted and then compressed fresh cream), Pita with Kiśelo mlijeko (buttermilk or yoghurt, or Popara or Bread with Skorup.

Soups are divided into clear soups (Supa, pronounced as soop-uh), thick soup-stew (Čorba, pronounced as chore-buh) and porridge-style soups( Kasa, pronounced as kuh-shuh). Usually served as the first course of lunch, the largest meal of the day, soups are very popular, especially Koko?ija Supa (Chicken Broth), Goveđa Supa (Beef Broth) and Jagnjeća Supa (Lamb Broth). Traditionally, after the broth is made, a handful of rice is added to the pot to make the soup more substantial. Nowadays, pasta has taken over as the preferred addition.

A piece of seasonal fruit is the most common way to end the meal while sweeter biscuits and such are usually served around teatime or with coffee. These are Priganice (Fritters or flat Doughnuts) served with honey, cheese, jam or homemade syrup made from a wild Pomegranate, that grows just about everywhere in the southern half of Montenegro.

Dairy Products such as Kiśelo mlijeko (buttermilk) and yogurt are common drinks and can be bought everywhere.

The most well-known wines in the south of Montenegro are Vranac and Krstac. Vranac, a red wine (or black wine as it is called in Slavic languages) is made with coarse and dark grapes picked between mid September and end October. Served at the room temperature, it goes well with smoked or grilled meats, as well as with all strong cheeses.

Niksic Beer is a real trademark of Montenegro and is made of barley, hard mountain water and bitter and aromatic hops. It is usually being served cool at the temperature of 5 degrees C.

Montenegro’s rakija a brandy is made from grapes from the Zeta valley and Crmnica area. Reminiscent of Russian vodka, Rakija is stronger and more aromatic. Montenegro also produces a brandy made from the small and half wild apple found in the north of Montenegro, and plums and pears. Another brandy is made from junipers. All brandies in Montenegro bear the name of the fruit from which it is made of, resulting in lozovaca or loza (made of grape), sljivovica or sljiva (made of plum), krusku (made of pear) etc. Prvijenac, a very popular and strong brandy, is extremely aromatic. Inevitably, a glass of Loza (Pomace brandy similar to Italian grappa) will follow a meal. Sipped slowly it is accompanied with a glass of water.